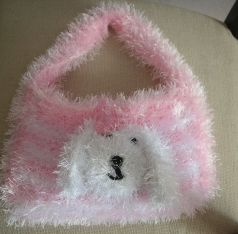 Fluffy textured yarns are great for kids' knits as they not only have the novelty factor but are super soft too. Eyelash yarn is a really furry, fluffy yarn which is ideal for cuddly toys and the dog on this project. The bag itself is really simple to knit and you can easily adjust the length of the strap to suit your needs.


Bag (worked in garter stitch throughout) 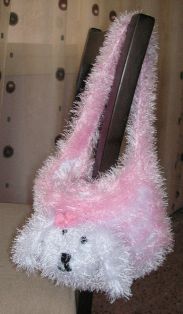 Using 6mm needles and yarn A cast on 35 sts Work 10 rows Join in yarn B, carry yarn up side of work when not in use Rows 1-4: using yarn B  Rows 5-8: using yarn A  Rep last eight rows until there are eight yarn B (white) stripes Cut yarn B Using yarn A  Work s10 rowsCast off


Side Strip and Handle

Using 6mm needles and yarn A cast on ten sts Work in garter st until piece meas 66cm or desired length Cast off
To Make Up
Fold Bag in half, pin one short end of Side strip to centre of fold. Pin and sew each side of Bag to Strip to form side gusset. Repeat on other side of bag. Fold remaining piece in half to form handle and sew in place.
Dogs Ears (make 2)
Using 6mm needles and yarn B  cast on six stsNOTE: worked from bottom to tipWork in garter st throughout . K two rows Increase one st at each end of next and foll alt row until there are ten sts Work without shaping until Ear meas 8cm Decrease one st at each end of next and every foll row until six sts rem Cast off
Dogs Head 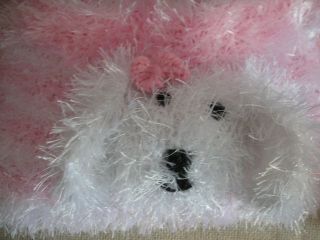 To Make Up
Sew up centre back seam of Head, add stuffing before closing. Flatten on one side so it sits correctly on front of Bag. Using picture as a guide, embroider face. Stitch an inverted ‘Y’ to make nose and mouth, make French knots for eyes and use straight stitches for eyebrows. Sew Ears to top of Head. Add bow to top of Head as shown.Place Head onto front of Bag and oversew around edges to attach.

based on pattern by val pierce
Posted by Love In the Language of Yarn and Education at 5:28 AM