This cute pumpkin hat pattern with rolled brim knits up quickly in one evening. Complete with stem, it is the perfect punctuation to a halloween outfit. Knit one for every member of the family! 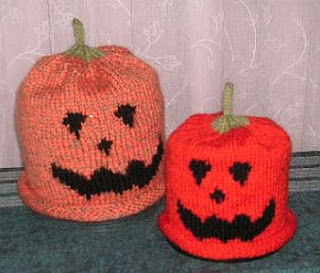 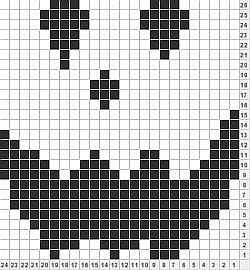 Cut the yarn, leaving a tail about 3feet long. Close the top of the hat by drawing yarn through all but 4 of the remaining stitches. Pull tight and fasten securely on the inside. Bring the yarn back through to the outside, just to the right of the needle containing the 4 remaining stitches. Work 4-st I-cord* for 1.5 inches and fasten off by drawing thread through stitches, pulling tight and fastening securely.
Weave in ends and sew seam.

Why a Jack O Lantern?


There are many lore's and legends surrounding the origin of the Jack O Lantern. The most popular tale is that of an Irishman named Jack. Well known for his drunken meanness, Jack got so intoxicated on a Halloween that his soul began to leave his body. The Devil saw an opportunity to claim a victim and promptly came to earth. Jack was desperate to avoid his fate so he begged the Devil to allow him one last drink. The Devil consented but stated that Jack would have to pay for his drink because the Devil carried no money. Jack claimed to only have a sixpence left and asked that the Devil assume the shape of a sixpence to pay for the drink. Then, tab paid, the Devil could change back to himself.
The Devil considered the request reasonable and changed himself into a sixpence. Jack immediately grabbed the coin and put it in his wallet, which had a cross shaped catch. The Devil was unable to get out and began ranting and cursing. They then made a deal that the Devil would be released if he agreed to let Jack alone for one year. The Devil agreed and Jack set forth to reform is behavior over the next year. It wasn't long before Jack slipped back into his mean, drunken ways and the next All Hallows Eve the Devil appeared to Jack and demanded his soul. Once again, Jack was desperate to save himself and did so by tricking the Devil.
He suggested to the Devil that he may want one of the delicious apples hanging in a tree nearby. He offered to allow the Devil to climb on his shoulders to reach the apples. Once the Devil was in the tree, Jack pulled out a pocket knife and carved a cross in the tree trunk. The Devil could not get out of the tree. Furious and desperate, the Devil offered Jack ten years of peace in exchange for freeing him. Jack insisted that The Devil never bother him again and he would be freed. The Devil resentfully agreed. Jack then returned to his old ways but before the next Halloween, his body gave out and he passed.
He was turned away at the gates of Heaven because of the meanness in his life. The Devil refused him at the gates of hell, stating that he would never bother him again and told him to return from whence he came. To help Jack see on his journey, the Devil threw him a burning lump of coal from hell. Jack put the ember inside of a turnip and it has been Jack's light on his eternal wanderings ever since. To protect oneself from Jack on All Hallows Eve, jack o lanterns were placed on porches and in windows, in hopes that Jack would take the light if needed instead of bothering anyone.

Posted by Love In the Language of Yarn and Education at 5:45 AM