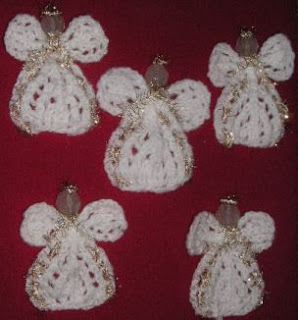 Knit a little angel to adorn your Christmas tree or decorate your packages. 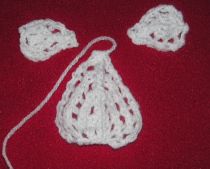 Finishing
Overlap the cast off edges of wings and sew into place. Bend the tinsel in half and twist to form a circle in center for halo. Insert both ends through hole in bead. Place angel body with wings attached, on top off the tinsel centering it under the bead. Working each end of tinsel seperately, bring from behind and under 1 wing, crossing in front to bring over opposite shoulder to back, then weave in and out through eyelets along edge of body. Repeat with other end of tinsel for opposite side. Attach cord for hanging. 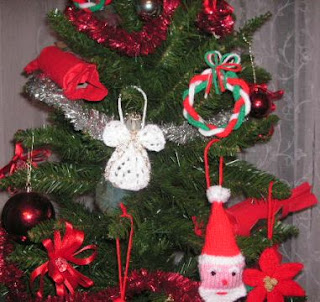 If you see some different lights
Around your Christmas tree
It could be Christmas Angels
Hiding there to see.

The fun and joy of Christmas
As they watch the children play.
And as they watch you celebrate
This very special day.

But there's another reason that
The Christmas angels appear,
They're here to remind us why
It's a special time of year.

This is the day that Christ was born
Years ago in Bethlehem
He's the one who is our Savior
He is King of all the land.

So celebrate His birthday
With your presents, cheer and love
And let Him know you're glad He is
Our Savior up above.

Then the Christmas Angels
Will be happy they were here
And they can leave, but don't you fret
They'll be back again next year.


angel designed by Cindy Polfer.
Posted by Love In the Language of Yarn and Education at 9:32 AM