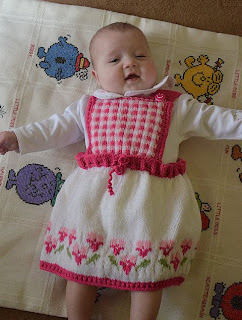 A little more challenging to knit but so worth it. I really enjoyed knitting this dress and the colours work great together.

INSTRUCTIONS
Note: Knit Rows - right side of work - read chart from right to left
Purl Rows - wrong side of work - read chart from left to right
When working from the chart, carry colours not in use loosely across WS of work. When colours must pass over more than 3 sts, weave them over and under center point of color in use. The colours are never twisted around one another. 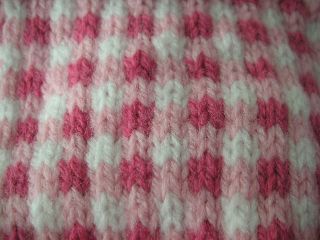 Cast off knitwise. Rep on opposite side of Bib. 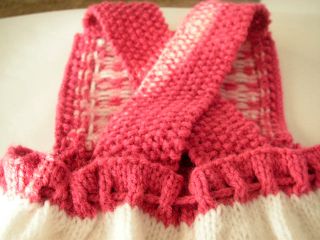 Fold waistband to WS along fold line and sew in position, leaving an opening at center back to insert twisted cord, attaching Bib to waistband stitching and sewing sides of Bib to waistband on WS. Sew Straps in position. Sew buttons on Straps using eyelet holes of Bib edging to form buttonholes and noting Straps cross at back.
If you need any further advice for knitting with colour please see Colourful Knitting a previous post on this blog.

Posted by Love In the Language of Yarn and Education at 9:43 AM