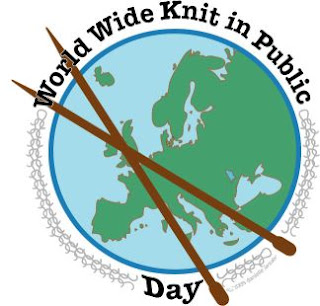 Better living through stitching together.

World Wide Knit in Public Day was started in 2005 by Danielle Landes.  It began as a way for knitters to come together and enjoy each other's company.  Knitting is such a solitary act that it's easy to knit alone somewhere and sink into your work without thinking about all the other knitters out there.  Neighbors could spend all their lives never knowing that the other knits.  This a specific day to get out of your house and go to a local event (with your knitting in tow) just for you and people like you.  Who knows you might even bump into your neighbor!  Consider this a spark, to ignite a fire; getting all of the closeted knitters out into fresh air.

WWKiP Day is unique, in that it's the largest knitter run event in the world.  Each local event is put together by a volunteer or a group of volunteers.  They each organize an event because they want to, not because they have to.  They bring their own fresh ideas into planning where the event should be held, and what people would like to do.  If it weren't for these volunteer hosts, WWKiP Day would still just be an idea.  So when you go to your local event, make sure you thank your host(s) and if you're inclined, bring along some yummy treats to share.

In the past some people have used this event as a means to show the general public that not only grannies knit! and while that's great and all, keep in mind that without those grannies we wouldn't have the wealth of knitting knowledge that we do.

WWKiP Day is really about showing the general public that knitting can be a community activity in a very distinct way.  In some places there are many different knitting groups that never interact with each other, on WWKiP Day they come together in one place, making them hard to miss.

Over the years there have been local events in Australia, China, England, Finland, France, Ireland, Norway, South Africa, Sweden, United States and so many more countries.

WWKiP Day takes now takes place from the second Saturday to the third Sunday of June each year; making it a week long celebration of knitting and other fiber arts.
It'n not unusual for me to be seen knitting in public, I quite often take my knitting down to the sea front. If you'd like to join me for wwkip I will be under the hand of peace statue on the sea front Kuşadasi, Turkey 11am  tuesday June 12th 2012.
Posted by Love In the Language of Yarn and Education at 4:13 AM