A whole set of these poinsettia ornaments on your Christmas tree would look wonderful. 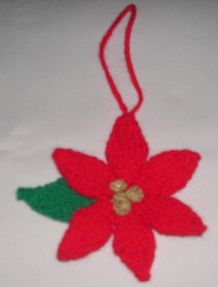 
Instructions : Petals Make 6 red and 1 green
Cast on 3 sts
Row 1 and all alternate rows Purl.
Row 2 Knit front and back in all sts -6 sts 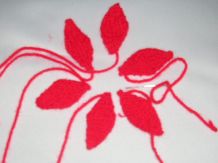 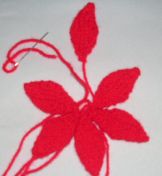 Sew core of poinsettia tog by taking one of the yarn tails from a petal and weaving it through the bottom points of all petals. Weave in all ends. Sew berries to the middle of the poinsettia. sew leaf behind and between two petals. make loop for hanging and attach to tip of petal.

The History of The Poinsettia.
Christmas is a sacred time to the faithful of Mexico and people often celebrate by assembling and decorating life size nativities at the front of their churches. On Christmas Eve, parishioners are invited to bring a gift of thanksgiving to the manger at their church.
On a very special Christmas Eve, a little boy quietly walked to his church. Despite his desire to celebrate Christmas, he drug his feet a little as he walked, embarrassed that he was too poor to buy, or even make, a gift to take to the manger.
Abruptly, the great light of an angel appeared to him on the road, instructing him to pull weeds from the side of the road, and to take them as his gift to Jesus. With shaking hands, the boy did as the angel instructed and ran with his weeds the rest of the way to church.
When he arrived, he held his head high as he stepped to the front of the church. Laying the weeds in the manger, he knelt and began a prayer of thanks. As he prayed, his weeds transformed into magnificent, star shaped flowers of bright red, pink and white.
These Poinsettias, or “Flor de la Noche Buena," (the Flower of the Holy Night) amazed everyone in the church that Christmas Eve. Today, people around the world bring Poinsettias into their homes and churches at Christmas to remember the star that led the Wise Men, and a little boy in Mexico, to the most wonderful manger.
The Poinsettia was introduced into the United States by Joel Roberts Poinsett in 1828 while he was a minister in Mexico. It became a part of American Christmas tradition in the early 1900s when it was promoted by Californian Albert Ecke.
Sourced from: http://www.billpetro.com/HolidayHistory/hol/xmas/poinsett.html

Posted by Love In the Language of Yarn and Education at 7:36 AM