Keeping in tune with the holiday theme, these are subtle. 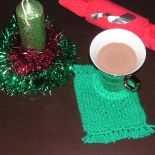 This is not your standard square and the fringe finishes the pattern making it very much like a mini-rug for your mug. . It's perfect for using up your left over sock yarn. The mug rug (coaster) works up fast and a few tied together with a ribbon or wrap would make a great little gift for a friend or would make a perfect Christmas gift exchange gift for a co-worker, or even make a few for yourself.

B2= border 2 knit stitches beginning and ending of each row 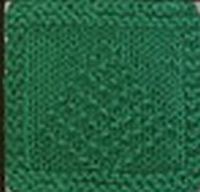 Knit remaining border rows then BO and weave in ends and fringe. 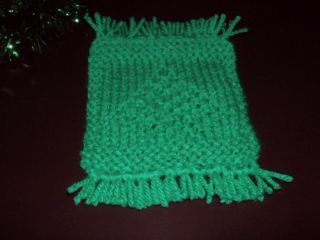 Each tassel of fringe is made with two strands of yarn, attached to the edge of the coaster with a crochet hook, and trimmed to an even length. Cut approximately 50 strands of yarn, each about 4.5 inches long. Take two strands held together and fold them in half to make a loop. Insert the crochet hook behind the selvage stitches at the end of the row, and then through the loop you have created. Pull the loop through and leave it on the crochet hook (the ends of the yarn should still be in your hand). Continuing to hold the yarn taut, wrap all of it around the crochet hook and pull it through the loop, attaching it to the edge of the coaster. Pull the strands taught. Repeat this along the side of the coaster. When you have placed fringe on two sides of the coaster, use scissors to trim it to an even length.
Posted by Love In the Language of Yarn and Education at 6:30 AM