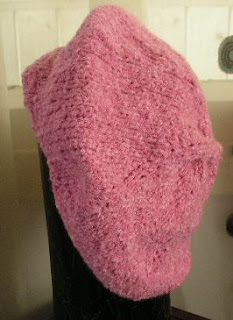 The origin of the beret can be traced back to the Basques, (people living on both the French and Spanish sides of the Pyrenees Mountains). The original Basque beret was either navy blue or red, but today the beret is available in a wide array of colors. The beret fits snugly around the head, and can be "shaped" in a variety of ways – it is commonly worn pushed to one side (local custom usually prescribes which, but there is no universal rule) and can be worn by both men and women. Few items of clothing have been adopted by so many varied groups of people, living in different periods of history, as the beret. During World War II, the French Resistance movement, the Maquis, wore the Basque beret and because it was the most common French headwear, the Maquis was able to wear it without bringing undue suspicion to this covert operation.

The beret was then taken up by special forces, often with the suggestion of ‘undress’ uniform, such as USA Green Berets, Black Berets (USA Rangers), UN Blue Berets, Turkish Red Berets to name but a few.
Che Guevara, a hero of the Cuban revolution, made the beret a worldwide symbol of the revolutionary guerilla fighter. The Guardian Angels, a vigilante group who patrols the subways and streets of some of the world’s major cities, wear red berets. In fashion the beret is part of the popular stereotype of intellectuals, film directors, artists (particularly painters), hipsters, bohemians and beatniks. The Rastafari movement often wear a knitted or crocheted black beret with red, gold, and green circles atop their dreadlocks. They consider the beret and dreadlocks to be symbols of the biblical covenant of God with his chosen people, the black Israelites. The circular flat shape of the wool, felt or cotton beret can be sporty when worn close to the head facing forward or jaunty when tipped to the side; when pulled down to cover all or part of the forehead, it is more dramatic. Inexpensive and hardy, berets are available in a range of style variations, colors, and sizes.

If you want to get ahead in the style stakes this winter, then don't get a hat, get a beret! Berets are big hits this season. Recently, a long line of celebrity A-listers have been seen sporting a beret, from Beyoncé, Sienna Miller, Cameron Diaz, Rhianna, Fergie, Madonna to Kylie Minogue.

choosing how to wear it is very much a matter of taste. Experiment with jaunty angles and if it feels right for you, then go for it!
The best thing about wearing a beret, apart from giving the impression that you have a sense of fun, is that it suits most face shapes and transcends all age groups. 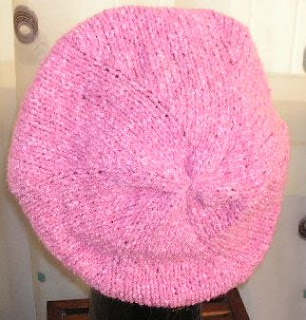 I chose a soft boucle type yarn in a Pale Rose Pink shade as October is Breast Cancer Awareness month and this is a great way to show your support.

Abbreviations;
K - Knit
P - Purl
M1 - Make one extra stitch by knitting front and back of the stitch
K2tog - Knit 2 stitches together

Posted by Love In the Language of Yarn and Education at 9:02 AM