Have you ever heard of yarn bombing? Also known as "guerrilla knitting" or "knitted graffiti," yarn bombing is the act of wrapping a piece of knitting around a public object - places like light poles, chain-link fences, step railings, and tree stumps, to name a few. 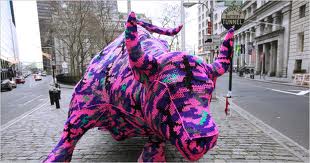 I must admit that when I first heard of yarn bombing and saw photos of it, I thought it was completely stupid. Why would you want to waste your time knitting things for inanimate objects? But my love of knitting made me incapable of ignoring the articles I saw here and there, and so I began reading. And then I understood: yarn bombers aren't wasting their time. They're using their craft to make a world that often looks and feels hard, cold, and unwelcoming a little warmer, a little softer, a little more inviting.Yarn bombing takes that most matronly craft (knitting) and that most maternal of gestures (wrapping something cold in a warm blanket) and transfers it to the concrete and steel wilds of the urban streetscape. Hydrants, lampposts, mailboxes, bicycles, cars — even objects as big as buses and bridges — have all been bombed in recent years, ever so softly and usually at night. 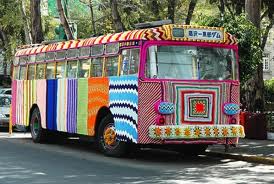 It is a global phenomenon, with yarn bombers taking their brightly colored fuzzy work to Europe, Asia and beyond. In Paris, a yarn culprit has filled sidewalk cracks with colorful knots of yarn. In Denver, a group called Ladies Fancywork Society has crocheted tree trunks, park benches and public telephones.
Seattle has the YarnCore collective (“Hardcore Chicks With Sharp Sticks”) and Stockholm has the knit crew Masquerade. In London, Knit the City has “yarnstormed” fountains and fences. And in Melbourne, Australia, a woman known as Bali conjures up cozies for bike racks and bus stops. 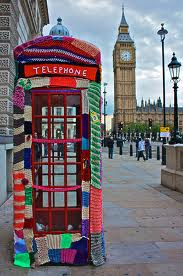 To record their works (the fragile pieces begin to fray within weeks), yarn bombers photograph and videotape their creations and upload them to blogs, social networks and Web sites for all the world to see. 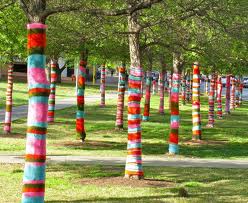 Unconventional? Absolutely. But yarn bombing is all about making the world a friendlier place... and I can't help thinking that a friendlier world is an infinitely better one.
Posted by Love In the Language of Yarn and Education at 7:44 AM 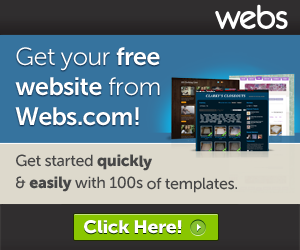